Musique Magazine - A Killer’s Confession Tears It Up on “Light to Darkness” - Wake Up! Music Rocks
915
post-template-default,single,single-post,postid-915,single-format-standard,theme-bridge,bridge-core-3.0.1,collateral-product-columns-2,woocommerce-no-js,qode-page-transition-enabled,ajax_updown_fade,page_not_loaded,,paspartu_enabled,paspartu_on_top_fixed,paspartu_on_bottom_fixed,qode_grid_1300,qode_popup_menu_text_scaledown,footer_responsive_adv,columns-4,qode-product-single-wide-gallery,qode-theme-ver-28.7,qode-theme-bridge,wpb-js-composer js-comp-ver-6.8.0,vc_responsive

Home > General Wake Up! Music Rocks News  > Musique Magazine – A Killer’s Confession Tears It Up on “Light to Darkness” 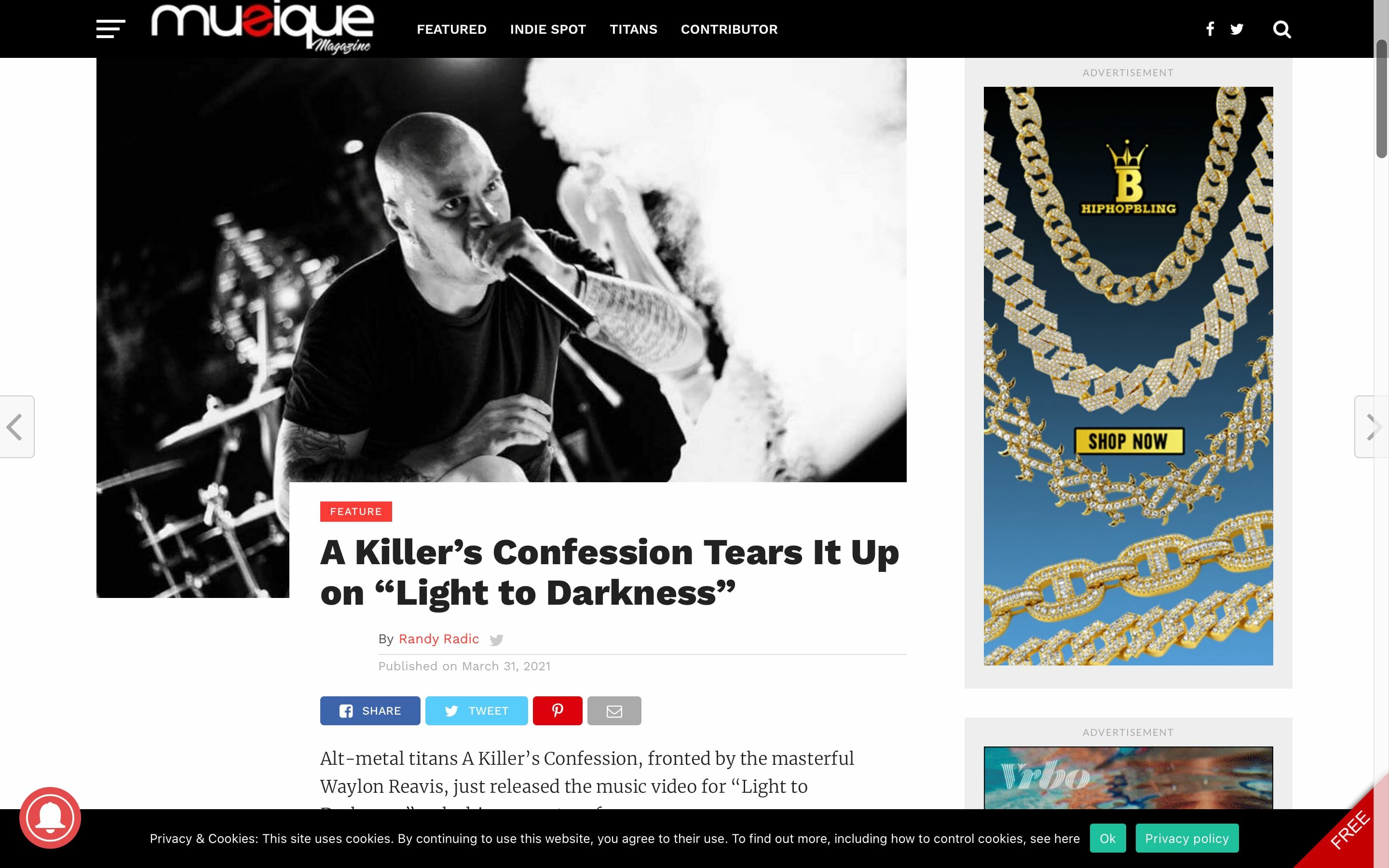 Alt-metal titans A Killer’s Confession, fronted by the masterful Waylon Reavis, just released the music video for “Light to Darkness,” a slashing monster of a song.

Made up of Waylon Reavis (vocals), Tommy Church (guitar), JP Cross (bass), and Morgan Bauer (drums), since signing with Pepper Gomez’s Wake Up! Music, A Killer’s Confession has marched from success to being one of the most electrifying bands on the alt-metal scene.

After leaving Mushroomhead, Reavis decided to put together his own band, a band fashioned according to his own exquisitely subtle vision of what alt-metal could and should reflect: shimmering accessible melodicism amalgamated with hints of industrial rock and beaucoup sonic bellicosity.

Imagine the muscle of Slipknot, the snarling innovation and beefy impact of Korn, and the rising and falling leitmotifs of Linkin Park, and mix the intoxicating ingredients together in a Waring blender. Then add the nuclear-powered voice of Waylon Reavis, along with the pressure, sound, and cutting brio of a trio of indomitable give-no-quarter musicians, and you realize A Killer’s Confession.

The music ramps up, thrumming with howling, rumbling textures, rough and ready, topped by Waylon’s gale-force rasping howls. A festering, fulminating guitar solo injects the harmonics with incandescent licks, ripping the very fabric of the atmosphere.

At once proximate and prodigious, raw and refined, “Light to Darkness” assumes layers of primordial substance – unrelenting, audacious, and hypertrophic.

The video depicts A Killer’s Confession traveling to a performance, setting up on stage, and the band arriving. Once the performance begins, the band revs it up to cyclonic levels, displaying their sonic sovereignty over the stage, pumping out galvanizing waves of momentum.

“Light to Darkness” shreds the dynasphere.