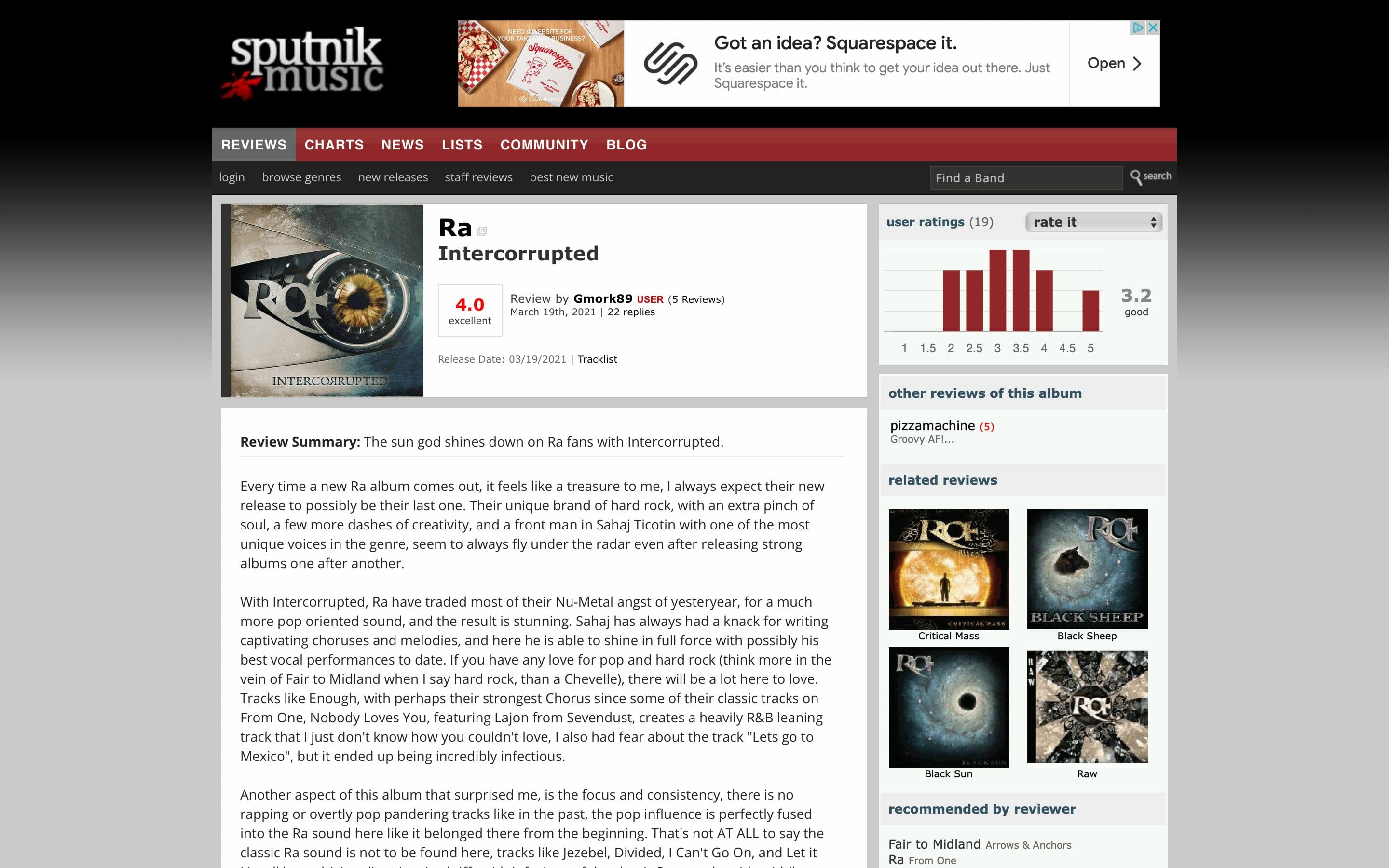 Every time a new Ra album comes out, it feels like a treasure to me, I always expect their new release to possibly be their last one. Their unique brand of hard rock, with an extra pinch of soul, a few more dashes of creativity, and a front man in Sahaj Ticotin with one of the most unique voices in the genre, seem to always fly under the radar even after releasing strong albums one after another.

With Intercorrupted, Ra have traded most of their Nu-Metal angst of yesteryear, for a much more pop oriented sound, and the result is stunning. Sahaj has always had a knack for writing captivating choruses and melodies, and here he is able to shine in full force with possibly his best vocal performances to date. If you have any love for pop and hard rock (think more in the vein of Fair to Midland when I say hard rock, than a Chevelle), there will be a lot here to love. Tracks like Enough, with perhaps their strongest Chorus since some of their classic tracks on From One, Nobody Loves You, featuring Lajon from Sevendust, creates a heavily R&B leaning track that I just don’t know how you couldn’t love, I also had fear about the track “Lets go to Mexico”, but it ended up being incredibly infectious.

Another aspect of this album that surprised me, is the focus and consistency, there is no rapping or overtly pop pandering tracks like in the past, the pop influence is perfectly fused into the Ra sound here like it belonged there from the beginning. That’s not AT ALL to say the classic Ra sound is not to be found here, tracks like Jezebel, Divided, I Can’t Go On, and Let it Lie, all have driving djent inspired riffs with infusions of the classic Ra sounds, with middle eastern vocal melodies and riffs that break through to solidify that these are Ra songs through and through. If there were ever a track to rival fan favorite Sky, it would be “Somewhere Beautiful”, ending the record on an extremely high note, with an epic chorus, beautiful guitar solo, and Sahaj at the top of his game, this song is a love letter to everything fans adore about this band.

Ra are back in a big way with this release, it’s just a damn fun and consistent album with an excellent vibe. I’d say front to back this could be their most consistent release thus far.