Waylon Reavis of A Killer’s Confession: ‘I live every day proud’ because of recovery - Wake Up! Music Rocks
941
post-template-default,single,single-post,postid-941,single-format-standard,theme-bridge,bridge-core-3.0.1,collateral-product-columns-2,woocommerce-no-js,qode-page-transition-enabled,ajax_updown_fade,page_not_loaded,,paspartu_enabled,paspartu_on_top_fixed,paspartu_on_bottom_fixed,qode_grid_1300,qode_popup_menu_text_scaledown,footer_responsive_adv,columns-4,qode-product-single-wide-gallery,qode-theme-ver-28.7,qode-theme-bridge,wpb-js-composer js-comp-ver-6.8.0,vc_responsive

Waylon Reavis of A Killer’s Confession: ‘I live every day proud’ because of recovery

Home > General Wake Up! Music Rocks News  > Waylon Reavis of A Killer’s Confession: ‘I live every day proud’ because of recovery 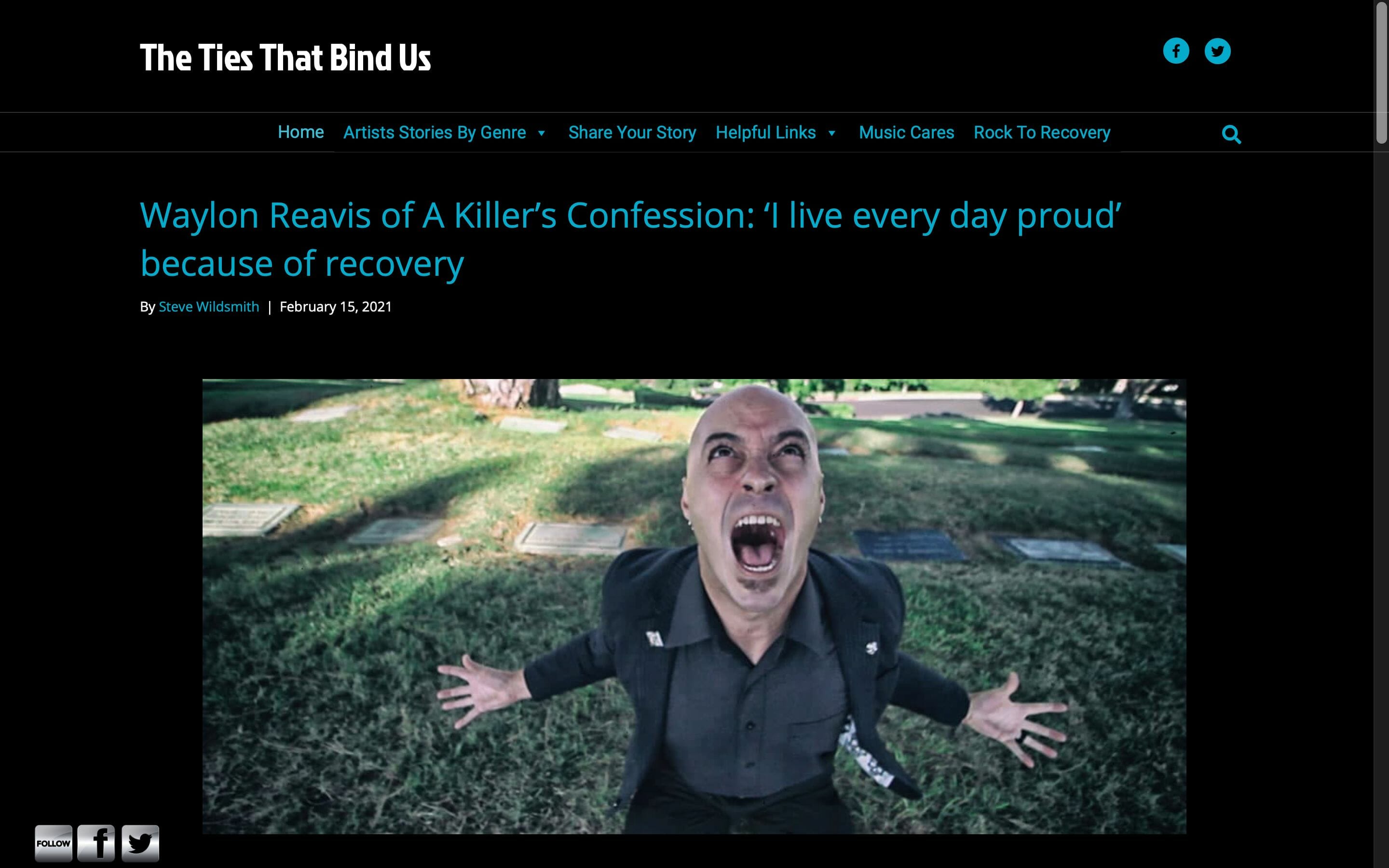 20 Feb Waylon Reavis of A Killer’s Confession: ‘I live every day proud’ because of recovery

For Waylon Reavis, recovery from his addiction didn’t come through 12 Step meetings or on a therapist’s couch.

It came down to a simple choice: Did he want to get clean for himself and the love of his life, or was he ready to give up and surrender to the cold siren song of abyss?

Fortunately, he chose the former, he told The Ties That Bind Us this week, and every day since has been a blessing. The former vocalist for the metal band Mushroomhead, and now frontman for the band A Killer’s Confession, has been delivered. Life still shows up — it always does, but then again, it kept showing up even while he was addicted to drugs, he added.

Being clean and sober, however, means that he’s able to accept the bad, celebrate the good and build a career for himself that’s the most rewarding thing he’s ever done.

“When I told her I was done that last time, I meant it,” Reavis said. “I wanted change, and she knew I wanted change. I wanted to be happy. I didn’t care about being rich or being famous or other people’s love. I wanted her love, and I knew that what I was feeling for her would be gone if I didn’t get clean. Something told me, ‘This is your door. She’s going to stay with you if you walk through this door, but you’ve got to walk through it, you’ve got to walk the line, and you’ve got to be accountable.’

“And I was relieved. I don’t have cravings. I never think about it. This is the  most I’ve talked about it in a long time, even though I’m very open about my sobriety. Just the idea of getting high now, it’s like a sickness, like I’m going to be violently ill. I physically hurt with the thought, and I know that’s my body telling me, ‘You don’t want that stuff.’ Sickness, anxiety and pain is what I feel when I even see somebody getting high in the movies, and I’ll keep that. That’s my badge of honor.” Growing up in the South, Reavis — who hails from North Carolina — started out on the straight and narrow. His mother was a Jehovah’s Witness, and his father was Southern Baptist — “I had to go to two churches a week!” he said — and the metal he discovered via friends was definitely frowned upon in the Reavis household. On May 5, 1995, however, it ceased to become a genre he listened to and became a calling, he added.

“I snuck out of my house and went to my first concert — Marilyn Manson, Danzig and Korn, and Korn opened,” he said. “When Jonathan Davis (Korn’s singer) and the rest of the band got off stage, I knew at that moment, ‘This is what I have to do.’ I’ve never been moved so hard in my life, and I was determined to follow that dream. I still follow that dream, but now I have some added baggage with it.”

He was 16 years old, and less than a decade later, he joined the nu-metal band Mushroomhead as vocalist after original singer Jason “J Mann” Popson stepped away. The Cleveland-based outfit, established by drummer Steve “Skinny” Felton in 1993, made its bones by wearing masks and makeup in a similar vein as GWAR and Slipknot. Over the course of Reavis’ tenure, from 2004 to 2015, the band’s three records featuring his vocal work climbed successively higher on the Billboard 200 albums chart. “The Righteous and the Butterfly,” released in 2014, landed at No. 20, and No. 1 on the Billboard Indie Albums chart, the most successful Mushroomhead release to date.

Serendipitously, Reavis added, the level of fame achieved with that band helped him establish relationships with other musicians who offered righteous guidance after he got clean and sober.

“Brian Welch (Korn’s guitarist), Fieldy (bassist Reginald Arvizu), those are the guys that warned me: ‘There’s nothing good after dark. Get out of there,’” he said. “Them boys know what’s up, and I owe a lot of credit to them, because they laid the foundation of the way I am now.”

It would take until 2017, however, before those lessons took. If anything, he added, joining Mushroomhead opened further doors of destruction that he was more than willing to step through.

“From 2004 to 2017, it was party, party, party,” he said. “There are years I don’t remember, and I’m ashamed of it, and it’s hard for me to look through old pictures, because I don’t see me: I see the drugs. Being artistic and being a musician, a lot of us do drugs. It’s a part of it, unless you’re straightedge and don’t, but we were our No. 1 enemies.